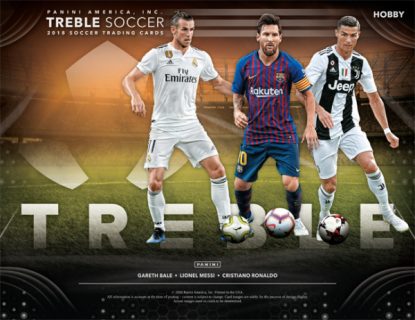 Every spot has a chance at a World Cup Sticker Auto. Players are listed to the clubs for the Manchester City players that i had to split up so every club team had a chance at a sticker auto.

***International customers will need to contact me about shipping costs to orders@gvsportscards.com***

Configuration: 5 boxes per case. 3 packs per box. 5 cards per pack.

PRODUCT HIGHLIGHTS
– Treble is a brand-new product that celebrates club soccer teams throughout the world! This unique three-pack box delivers three autograph or memorabilia hits, on average!
– Treble marks the first time that you can pull true RCs of up-and-coming players! Find the first Rookie Cards of 25 players in Panini Premieres, which fall one per box on average!
– Find stunning micro-etched parallels of the 175-card Base and 25-card Panini Premieres set! All Hobby parallels are #’d /75 or less, including the 1/1 Platinum Edition!
– Look for seven distinct autograph inserts that feature superstars from around the world! Be on the hunt for First Ink, a set that showcases the debut autographs of players such as Real Madrid’s Marco Asensio!
– Celebrate the rich history of Panini FIFA World Cup Stickers with Sticker Tribute Signatures! Find autographs directly on 2018 FIFA World Cup Stickers from Cristiano Ronaldo, Lionel Messi and more!

BASE SET
2018-19 Treble Soccer has a 200-card set that contains 175 Base and 25 Panini Premiere. All players are shown with their club teams, and the roster is made up of more than 20 teams from across the world! Look for superstars from FC Bayern Munich, FC Barcelona, Chelsea FC and more! Additionally, Treble marks the first cards of Cristiano Ronaldo with Juventus!
On average, every box of Treble delivers three parallels!
The Base Set features the following parallel versions:
– Blue #’d/75
– Purple #’d/49
– Gold #’d/25
– Green #’d/10
– Platinum #’d/1

FIRST INK
Find the first certified autographs of stars of past, present and future in First Ink!

INSERTS
Every box of Treble delivers two inserts, on average!
There are six inserts to chase:
– Team Chemistry, which showcases two club teammates
– Midfield Majesty, a set that highlights some of the top midfielders in the world
– New Sensations, which features 30 players who have recently joined new teams
– Stallions, a 20-card set loaded with some of the strongest competitors in soccer
– Atmosphere, which focuses on 15 dynamic players
– Hidden Gems, a short-print set with 5 of the biggest stars in the world!