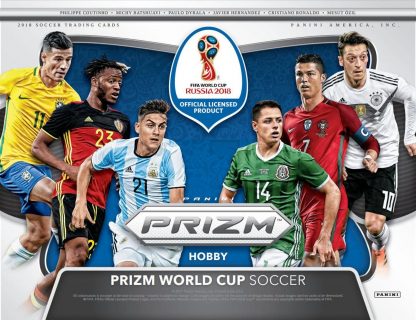 PRODUCT HIGHLIGHTS
– The countdown to Russia is on! Prizm returns for the 2018 FIFA World Cup with a comprehensive trading card product that celebrates all 32 qualified teams!
– Look for unique Prizm color parallels in every box! On average, find at least 16 Prizms per box, three of which that are #’d/199 or less! Be on the hunt for hot boxes that are loaded with Lazer Prizm parallels!
– On average, every box of Prizm World Cup delivers 16 Prizm parallels, 7 inserts, and either an autograph or a short-printed special insert!
– Look for the debut of the National Landmarks insert! This special set features custom illustrations of iconic aspects of every qualified nation! Featured players in this set include Argentina’s Lionel Messi, England’s Harry Kane, and Mexico’s Javier Hernandez!
– Find autographs of some of the biggest names in the field of 32! Look for star-studded signature combinations in Dual Signatures, Trio Signatures, and Quad Signatures!

Be on the lookout for the ultra-rare Cyrillic variations! These special versions of the base card feature the player’s name presented in Cyrillic text to celebrate host nation Russia!

NEW ERA
Many players will be making their World Cup debut in 2018. Find some of these up-and-comers in New Era!

NATIONAL LANDMARKS
National Landmarks features unique illustrations from all 32 qualified nations! This custom set showcases some of the most iconic aspects of each country in the field, including the players themselves! Look for this insert one-per-case, on average!

SCORERS CLUB
Scorers Club features players in the tournament who have racked up goal totals throughout their national team career!

ROAD TO RUSSIA
The qualifying stages of the 2018 FIFA World Cup featured many standout performers. Road to Russia is a super short-print autograph insert that celebrates 7 players  who shined in qualifying.